Driving in France requires understanding of the road signs.

There are generally two waves of signs. The first encountered sign indicates the road number and major towns or cities that lie beyond. This can contain a dozen places names or numbers which is impossible to process when driving quickly past, so it’s an initial relief to see a second sign coming into view. This sign, however, is the local sign, indicating only small local towns, through which one needs to not blink when passing, or the local commercial zones. I eventually worked out what that’s what they were, after first wondering why there were so many town names starting with ZA (zone agriculture) and ZI (zone industriel). The second sign usually adds to rather than reduces my confusion as it replaces any of the place-names I’d managed to remember from the first sign. I have become very proficient at U-turns in France.

On roundabouts, traditionally the directions were placed on the road after the roundabout, so all they really did is tell you that you took the wrong turn. There has been an improvement in recent years, with road signs now prevalent before each roundabout.

There are three wonderfully consistent signs throughout France that make it very hard to get lost in towns and cities. On approaching a town, ‘Centre Ville’ gets you to the main shopping area or at least the Town Hall (Hotel de Ville – which is not a hotel!). From there, signs point to places of interest. If trying to drive through a town, ‘Toutes Directions’ (all directions) is the one to always follow. Disobeying it just because it points west and you want to go east is invariably a mistake, as you plunge into streets that are windy, one way and often almost one car wide, or you discover a railway or river over which there is no bridge. The third sign is ‘Autres Directions’ (other directions), pointing the opposite way to some minor building or village. This is also worth following, unless you are absolutely certain that this building is your final destination, as it will be.

Road sign arrows are often difficult to interpret. A sign on the left side of the road pointing left means turn left. Quite straightforward. However, a sign pointing left situated on the right of the road means go straight ahead. An arrow pointing straight up also means straight ahead, so the road signs showing a leaping deer, an arrow upwards and the words ‘10km’ does not suggest Rudolph, Prancer and Dancer are in the vicinity.

Signs placed on street corners seems like the obvious place to have them. However, the combination of roads built right to the walls of houses, and walls being solid stone two or three stories high, means signs are necessarily placed in from the intersection, so do not come into view until one has already got to the cross road.

One sign that mystified me for many months in France was a yellow diamond on a white background, and its evil twin the yellow diamond with the black line across it. It was only when flicking through a child’s encyclopaedia I found a page on road signs and learned it means the road has priority, or no longer has priority over side streets. It seems to be a replacement to the old rocket signs that one still sees occasionally in France, but it’s hardly a more intuitive advancement.

The best signs are the brown tourist signs on the autoroutes. They point out nearby places of interest, such as chateaus that can be seen from the road; major tourist destinations to found from the next exit, such as national parks, historic towns or a regional speciality, such as glassware, confectionery or farm produce. These signs are all painted in shades of brown, creatively using very simplistic designs to convey the information instantly to the car passengers travelling 130kph. Occasionally, a sign will mystify – was that a crumbling stone wall, a man welding metal or a strange native animal? Some are subtle – a bee on a flower signifying a renowned honey region. Some struggle to be original, as the key feature of many towns is the 12C or 13C cathedral, and there’s only so many ways you can portray a gothic church. The vast majority, however, are very well chosen,are instantly recognisable and keep up interest on the otherwise dull dash across country. 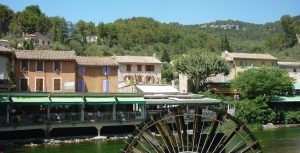