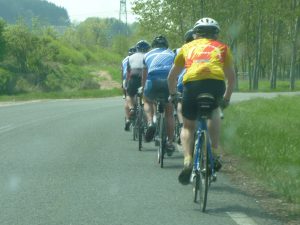 Southern Burgundy is criss-crossed by walking and cycling trails. The largest of these are the Voies-Verts (Green Trails). These trails are a connected set of old railway lines, canal tow paths and purpose-built paths that extend over 1000 km (600 mi). Connections to the Voie Verte (green trails) are near Cluny or Charolles, about 15 mins east or west from the cottage.

Walking routes through the district take the smaller roads, connecting villages, with one route walking directly past the cottage.

The Tour de France usually passes through Southern Burgundy. The exact route is not released until early in the New Year, however previous tours have passed within 45 mins of the cottage. Tour de France route can be found at www.letour.fr/us/

Cluny (15 minutes) is a major equestrian centre, with its Equestrian Centre (Hippodrome) hosting national and European championships. It also has a ‘pony club’ with horses available for riding at the centre or along country trails. Another Pony club is located at Paray le Monial (30 minutes).

This 27 hectare (7 acre) park only 5 km (3m) from the cottage is a national forest created in 1903 containing over 1000 species of trees and plants, walking paths and a lake. This is a wonderful place to picnic and take the family – and it’s free!

Our region is bounded by the Saone and Loire Rivers, which meet in Lyon. Both rivers feature boating, fishing and places to walk and picnic.

Burgundy is renowned for its fishing, with many fast flowing rivers throughout the region, including the Saone and Loire Rivers. Trout season starts mid May and continues till early September. Carp, pike and bream are also popular.